A Celebration Planting for the Millennium,
or a Forest Festival?
Helpful hint:
Most of the links are images (13 to 43k or so.)
to leave a picture Click "BACK" on your browser
(several times, perchance) or "Go"
Hope you enjoy the festival! 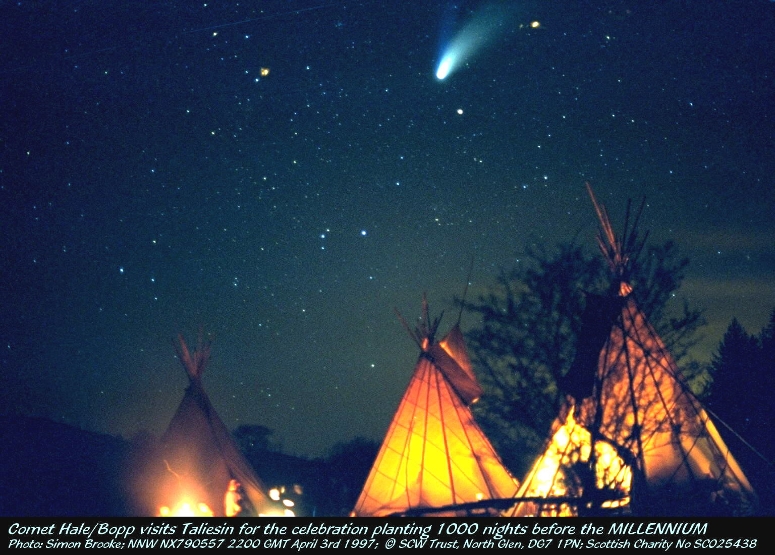 The celebration at Taliesin was a brilliant success, thanks to immense voluntary input.

Godfrey leads the list, but unnumbered others contributed handsomely.
I reckon 2 dozen or more put in at least a day (not counting those who came from afar) in just the build-up probably more than a dozen put in at least 3 days effort at hard labour, laying paths of bark chippings, stripping 150 poles, setting up six 22-foot tipis and a 50-foot longhouse, a green woodwork shelter, a mini-tipi box office, a trapeze setup for Tim & Karen, etc.

John Currie came and put up his painted twelve-foot genuine indian tipi, filled it with artifacts, dressed a young lady in full costume, and charmed young and old alike with traditional storytelling. He made the tipi and travelled with his wife, visiting reservations all over North America starting 40 years ago.

People brought tents and built benders, many stayed in the tipis, 13 in mine one night. The place was alive with kids, day and night. A large gang roaming one newmoon starnight found foxfire, the phosphorescent fungus, glowing in the dark woods and ran about bursting into adult fireside gatherings to share and show off their discovery: "Ed, Ed, I've got a stick that glows in the dark! Here, let me put my coat over your head so you can see it glowing!" They soon had found enough so all had a bit. The largest were fist-sized on rotting hazel butts.

On the 1000th night before the millennium (new moon or thereabouts), Comet Hale/Bopp and countless stars conspired with tipis lit by firelight within to produce what must surely be a prize-winning photograph from Simon and the most enduring image of the event.
There was music every night, though only programmed for Wednesday (Treebeard) &Thursday (Two Left Feet). Smoky longhouse barkchip floor for reel & willowstrip ceilidh.

Other music from Trevor, Karen, Blackie, Blue, Pete, Marco, Andy&Sarah, Mike, Tony, & many others. The last evening was like a family gathering round the kitchen fire, soft music mostly, and a memorable rendition of 'before the deluge' from our landlord & host, Tony (right). "Pay attention to the open sky," and, looking up, there was our guardian comet smiling in the northern starscape.

The catering was a major success, supervised by Sam & Monty with over 700 meals served, 120 at lunch on the Thursday. This is without counting innumerable snacks, dishes washed up, coffee, tea and cocoa on at most hours.
There was bread from two magnificent ovens & Monty had kids queueing for hours with their pitta bread and cheese pasties. Reinhart & Sophie's clay oven built on an inverted willow catenary form worked a treat, and Jason built a stone oven
clagged with clay & cowdung and turfed over. Both gave excellent service including bread in many forms, baked tatties, baked onions, apple crumble for thirty, and a haunch of venison. On top of that, campfire chips & apple fritters and the kitchen tipi's output, there was tarjeen cookery from Michael Mosse with chicken, fish and veggie dishes, all output in sufficient quantities to have leftovers (sometimes, some things) Loaves and fishes, the miracle constantly repeated.

Jon Barrett was brilliant at providing access to green woodworking techniques for dozens of kids and Stuart Morrison did two days as well. Charcoal John (Rippon) was up off and on through two nights after single-handedly chainsawing and splitting the whole kilnfull. We had the best cooking fuel available for the second half of the celebrations.

Mike Gardener (and collaborators) built a corragh about twelve foot by five out of hazel and calico coated with bitumen (as were many helpful young hands!) The maiden voyage on the pond had Mike at helm with an arkfull of kids and rough oars.
A huge gang of adults & other kids lined the shore, pushing them back out when the breeze blew them ashore. In all, there were many boatfulls of kids, the last with Godfrey at helm late on the final day.

Trevor & Lizzie built a most beautiful willow form shelter with thatched roof and living walls, to remain and grow into its place by the burn.

There were classes in basketmaking, young folks made charcoal in the campfires and then used it for drawing, the kids' final long monoprints turning into eight foot paper totem poles.
Andy Hirst brought his portable sawmill and produced beautiful slabs for bench seating among other work and demonstration of what locally added value can mean. We were given a lot of good wholesome food, a lorry load of bark chippings from Howie's and help from John Baird, with two tractors to distribute the bark around the site and re-inforce the pond dam. Very sincere thanks are due to Vanessa Morris, who contributed her skills and contacts as Crafts Development Officer to support many of the activities and her physical self for general labour as well. Thanks to ERDF/DGC/DGE for funding her post.

Ironically, no trees (or very few) were planted. Forest Authority and ESA rules seem to be in conflict and timeous approval was not agreed. We are planning to plant in the autumn, possibly October Holidays, subject to Beaurocratic OK. Also, due mostly to bureaucratic delays, we have yet to secure our Millennium Forest funding, but are assured it is imminent. This is also partly down to delays on our part in plan preparation and presentation. Too busy doing things to do plans? Perhaps one more meeting...?

We might have anticipated difficulty in clearing up, but on the day after, a squad of fifteen or more exhausted folk made a brave effort, dismantling most of the structures, re-locating the kitchen tipi to a semi-permanent site with the potential of gravity-fed spring water, and most agreed to meet in a week to finish. A week later, a full turnout, minus the long-haul folk finished removing unwanted paths, stacking poles and general tidying, leaving Taliesin very much alive in the Springtime, Sam in temporary residence to keep an eye on things. The bog myrtle is flowering after a real showing from the old wych elm, bluebells leafing, tadpoles wriggling, herons drooling, foxes patrolling, among the many other really wild folk. What a lot of community spirit!

Some deer damage evident on existing young trees, but not fatal. Amazing there are no rabbits! Traveller John's dog catches some in the farm fields further up, but he says he ain't seen any at Taliesin, more worried about adders. Maybe rabbits don't like bracken?

Of the peanuts & sunflower seeds I put out in one of the beeches a fortnight ago, the peanuts were gone, but not until after a week. New peanuts & some seeds put out today Only saw one red squirrel myself the whole time. John says there is one dead on a forestry track. Buzzards common. Coal tits, others. A large area of FE Potterland, overlooking Taliesin seems to be a naturally regenerating mix of larch and birch, about 3:1 larch. The large former hazel coppice area at the bottom is almost dead of conifer shade. Thanks for the firewood.
copyright (c) Ed Iglehart, for SCWT 16/04/97

Jackson Browne, 'Before the Deluge'

Southwest Community Woodlands Trust is a company limited by guarantee with charitable status SC025438. Company Reg. No.171277 Contact us

Please include address & telephone number and an indication of your interests and enthusiasms. All contributions are likely to be matched by Lottery funding. (if we can cope with the bureaucracy!)

Back to North Glen or Back to reading list